During the early days of Theatre Union & Theatre Workshop, Joan Littlewood, Ewan MacColl & the touring company created a ‘Manifesto for Theatre’ which they continually debated & adapted to fit their purpose.

The opening line of the Theatre Union Manifesto read:

“The theatre must face up to the problems of its time”

Joan Littlewood made shows that “faced up to the problems of their time’. She lifted the voices of the working class & created work about the erasing of local communities – dealing head on with the issues people faced.

There was often a radical, anti-establishment edge to her work & of course, she wanted to connect people & always get the community involved with their theatre & the environment in which they lived. It could be argued she always did this in the ‘take the theatre to the people’ ethos of those early touring years.

She initiated projects which went beyond the walls of theatre buildings:

All of these projects were essentially about getting people connected & involved in their community and showing them that they too can create, they too must make work & they too can have a voice.

Young activists such as Christine Jackson (one of Gerry Raffles original ‘Activists’) would get involved in helping make Joan’s ideas a reality.

When Joan occupied the wasteland surrounding the theatre, in order that they could help improve the environment for the community, she called on Gerry’s ‘Activists’ to help with that project and along with the local kids they cleaned up all the bomb sites and dumping grounds that had been allowed to build up, replacing them with recreation areas. Of course, not everyone was delighted by the efforts of Joan & the activists, but after a bit of trouble involving the kids swearing, Joan smoothed things over & got everyone back on board. 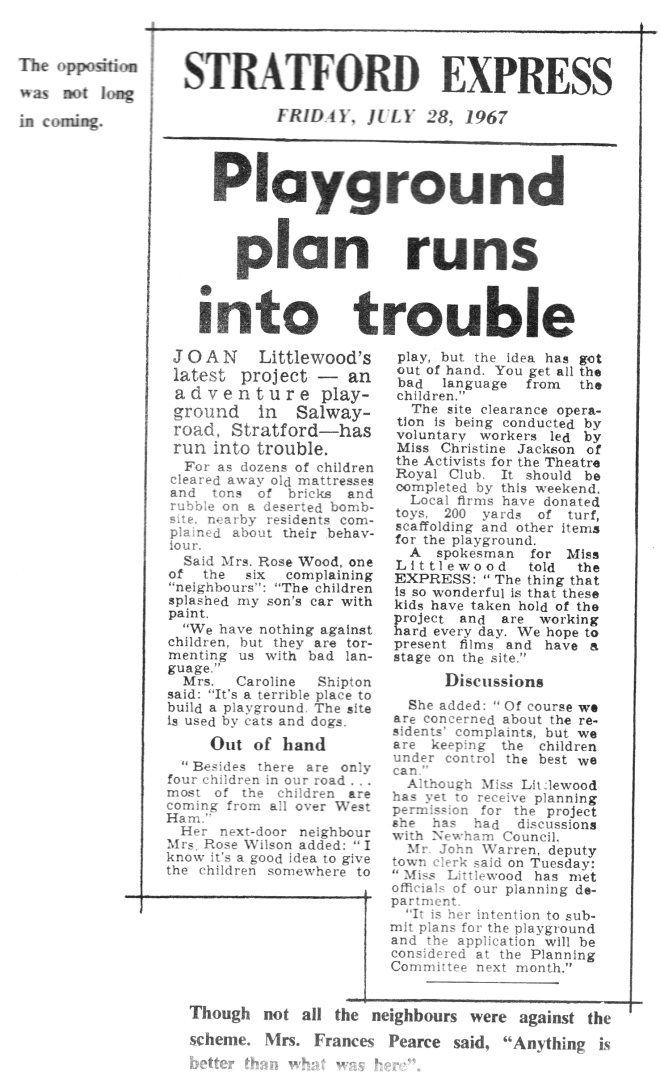 In the late sixties & early seventies the area surrounding Stratford East was being torn apart by developers clearing space for office blocks, tower blocks & shopping centres – to create a concrete jungle. So Joan & the activists occupied & reclaimed this land, building children’s playgrounds & planting trees – they understood that to honour the community they had to create space for people to play, learn & breathe more easily.

The Theatre Royal itself came under threat at this time & the fight to save it from the bulldozers really took it out of Gerry Raffles. He died not long afterwards, in 1975.

It’s worth noting that the builders who worked on these new concrete developments would often frequent the theatre bar, because they served a friendly pint & it was always open to local people – on one occasion one of them accidentally wandered onto stage in his yellow tabard, whilst looking for the toilet, the actors were only too happy to include him in the action. They all did a little jig, then he continued on to find the loo and they got on with the rest of the play. That’s the sort of thing that happened there. 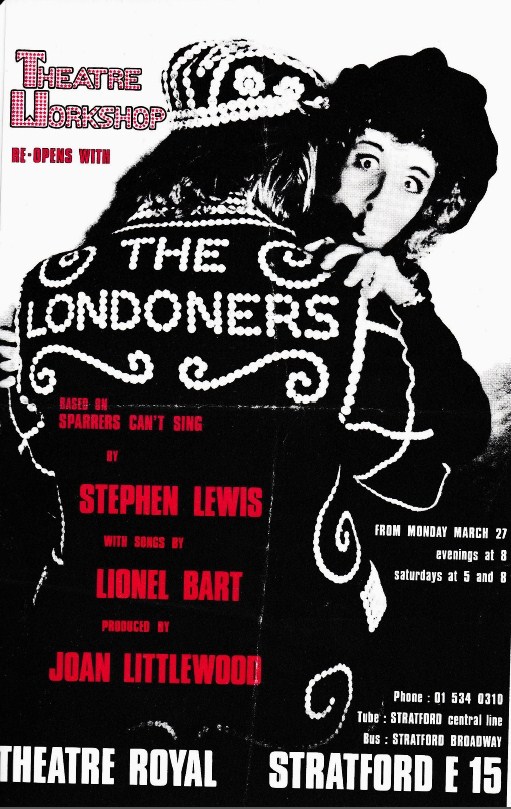 The show was ‘The Londoners’ which had been loosely based on a previous production ‘Sparrers Can’t Sing’ and was the story of families living in an area of the East End of London which had been allowed to be run down by the authorities before being sold off cheaply to developers. (Keeping it real!)

Actor Phil Davis, who got his first professional job with Joan Littlewood’s Theatre Workshop speaks about how Joan would add bits to the play during it’s run, to keep actors on their toes but also to keep relevant local news alive in the theatre, in the documentary ‘In the Company of Joan’. He says:

“When we were doing ‘The Londoners’ it was at the time of the three day week and they were trying to save electricity and not use too much energy. So Joan, without telling us, got an actor to pretend to be from the local council – in a brown, sort of overall – and he came on right in the middle of the show and said “There’s too many lights on! You’ve got to turn ‘em all down”

The actors ‘went with it’ of course. Joan would often ‘add things’ to the show – but they weren’t random, they kept it lively & current in terms of the local goings on. The things that affected people in their everyday lives. She told the actors rehearsing for ‘The Londoners’ that it was vitally important they gave their characters a strong voice.

It’s extraordinary that some believe the late sixties & early seventies to be the least productive period of Joan Littlewood’s career. I’d argue that at this point she really took things to another level – looking beyond the walls of the theatre & getting everybody involved in community activities. She challenged the establishment on stage and off – playing by her own rules & raising the voices of the community she served. Her so-called ‘weakest work’ could be compared to the best work of most directors.

Joan would sometimes consult with locals about who they might like to appear in their theatre, Roy Haywood & Paul Bird both grew up on the doorstep of the Theatre Royal Stratford East & they share their memories of Joan in the documentary ‘in the Company of Joan’ too. They speak about meeting a singer from ‘The Small Faces’, Jimmy Winston, when he came to audition for ’The Projector’. He’d engaged in lively banter with them before his audition. Later that day, Joan asked the lads what they thought of this young man as she’d heard they’d had an interaction with him, of course they gave her a resounding seal of approval – saying he was a good sort and they’d like to see more of him. He got the job. In the film, Roy Haywood says:

“I think what it was with Joan, if they liked us, then she liked them” 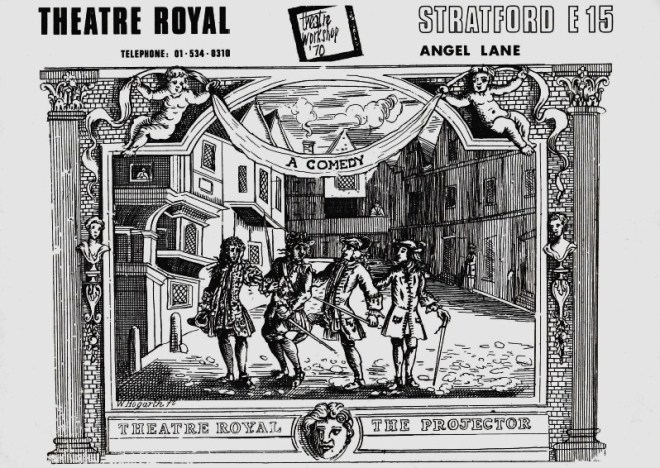 ‘The Projector’ was a play about a local tower block, Ronan Point, which had partially collapsed. Joan wanted to make a piece of theatre exploring the corruption & scandal behind this disaster. To avoid a libel case, she adopted a “little known ballad opera” from 1733 which ‘amazingly’ explored the very same issues. People have since questioned if this ballad-opera even existed in the first place! (Clue: It didn’t!)

According to an article on Theatre Workshop by ‘Plays & Players Magazine’ in 1972, many actors who worked with Joan agreed that one recurring theme during rehearsals was ‘contact between people’. Joan herself says, in that interview, when asked about what she likes to see on stage: 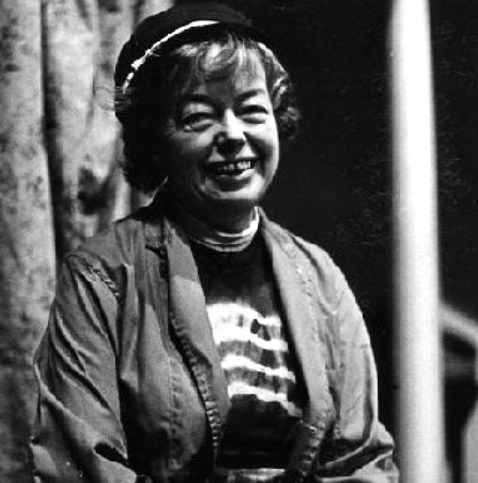 Of course, Joan Littlewood was as flawed as any human being, I’m told she could be more bloody difficult than most at times & sometimes she could be downright unreasonable! But it seems to me, that what the woman did not lack in was integrity, humour, drive or passion when it came to raising the voices of the community in which she worked. She never lost her fighting spirit & she created theatre that faced up to the problems of its time.

“Political, social and educational systems have got in the way of human expression”